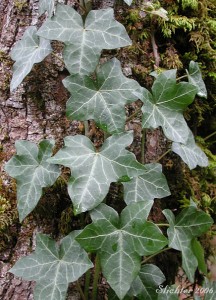 We all know what English Ivy is, right?  Hedera helix is native to Europe, western Asian and northern Africa.  It landed here in North America as a landscape plant and has escaped from those settings into our natural areas…becoming prominent on the invasive list.

English Ivy is an evergreen woody vine and can grow up to 90 feet.  The vine will climb or form dense ground cover.  The leaves are alternate and are heart-shaped with pointed lobes in young plants and broadly lanceolate in mature plants.  The light gray vine may reach a thickness of 10 inches in diameter and may be bumpy and gnarly.  Small greenish-yellow flowers appear in June to October.  Clusters of round drupes ripen to dark blue from October to May.

English Ivy prefers open forests but is adaptable to many habitats and moisture conditions.  It serves as a reservoir for bacterial leaf scorch that infects maples, oaks, and elms.  This invasive vine colonizes by vine growth and seeds that are spread by birds.  Very few species of wildlife use English Ivy because it is mildly toxic.

English ivy spreads locally through vegetative growth and new plants can grow from cut or broken pieces of stems that are able to root in the soil. It disperses longer distances via seed which is carried to new areas by birds including the cedar waxwing, northern robin, stellar jay, mockingbird, European starling, and house sparrow.

Poison ivy may be confused with English ivy in the winter because they both have hairy stems. However, poison ivy is deciduous and has no leaves during the winter time (English ivy has leaves all year round). During the growing season the three-leaved foliage and clusters of whitish berries help to distinguish poison ivy.

As the ivy climbs in search of light, it engulfs and kills branches by blocking light from reaching the host tree’s leaves. When mature English ivy reaches the upper canopy, it shades the leaves of the host tree, denying the tree the sunlight it needs for growth and nourishment. The ivy then receives enough sunlight to produce flowers and fruit. Tree branch dieback proceeds from the lower to upper branches. The host tree eventually succumbs from the steady weakening. Added weight of the vines makes infested trees much more susceptible to blow-over during severe weather. English ivy can also damage trees when it competes for water, nutrients, and light.

English ivy climbs using tendrils and root clusters that grow from its stems and exude a sticky liquid allowing the ivy to cling to structures. The rootlets will push into cracks and fissures in mortar and in any spaces between rocks, bricks, wooden slats, siding, shingles, etc., and can loosen and eventually damage that part of the structure where the ivy is growing. The vines can hold moisture and can serve as “highways” for insects and other pests.

Help to stop the spread!