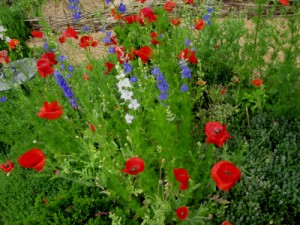 The Heritage garden was created by the Master Gardener’s 5 years ago to showcase herb, vegetable and edible flower varieties popular in the early 18th century in colonial Virginia. Each year thereafter the garden has moved forward in time and this year popular varieties from the late 19th century are being grown. The Heritage garden resembles a kitchen garden as plants are intermingled in loosely arranged beds. Some plants are ornamental like the boxwoods in the center, some are perennial like many of the herbs and some are planted seasonally such as the vegetables. This year the garden reflects plants from 1880 – 1890.

Hardscape features of the garden include the sundial in the middle, the split rail fencing around the garden, the wattle fence on the left side and the tomato table built to support the tomatoes in the left bed.

The wattle fence surrounding the beds on the left side was built of willow saplings during the spring and can be expected to last a couple of seasons. Alder saplings are another sapling which stays flexible for a long time but any sapling can be used in the green stage if used immediately. Historically wattle fences have been used since medieval times and are a low cost way to enclose areas. The tomato table was built of willow saplings and will be built higher up as the tomato plants gain height.

Download the  Heritage Garden Flyer to see what we’ve done this year.

Download our Heritage-Colonial Garden for Research on Plants from 1820’s – 1850’s fact sheet from a previous year’s plantings.