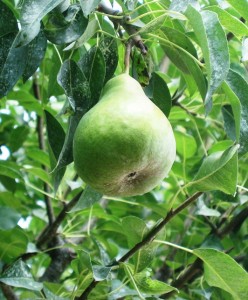 In 1998, the gardens were home to 1 peach, 2 pear (Seckel and Moonglow) and 3 apple (Liberty, Enterprise and Gold Rush) trees. In 2007 we lost the liberty apple tree to vole damage (girdling the trunk).  We also lost the peach tree to borers and a pear tree to age/disease.  But they produced well for us when they were healthy!

Each year the trees are pruned back to allow for maximum production of fruit.  It is important to keep any ground cover clear from the base of a fruit tree so the rodents can’t hide in there and chew away at the bark.

We also have 2 extremely productive fig trees that book-end the Herb Garden near our Pergola Classroom.

The tree was covered with peaches of good size. Quite a few peaches with brown rot were removed during the season to slow the spread of the disease. Peaches were harvested while still somewhat hard because it appeared that the brown rot was beginning to spread. Peaches were still delicious.

76 pounds of peaches were delivered to Interfaith Relief. All the garden workers enjoyed snacking on the less-than-perfect peaches

* Surround is the trade name for kaolin clay. Kaolin is naturally occurring clay resulting from weathering of aluminous minerals such as feldspar with kaolinite as its principal constituent (ATTRA 2004). Kaolin is a common mineral, considered “generally regarded as safe” (GRAS) by the U.S. Food and Drug Administration. It is used as an anti-caking agent in processed foods and an additive to cosmetics, toiletries and health products. It is also used as an “inert” carrier in some pesticides, and enhances the performance of some microbial products (Rasad and Rangeshwaran 2000).

This material has several modes of activity (Stanley 1998). Kaolin acts as a physical barrier preventing insects from reaching vulnerable plant tissue. It acts as a repellent by creating an unsuitable surface for feeding or egg-laying. The uniform white film may also disrupt the insect’s host finding capability by masking the color of the plant tissue. Furthermore, particles of kaolin act as an irritant to the insect. After landing on a treated surface, particles of kaolin break off and attach to the insect’s body triggering an excessive grooming response that distracts the pest.

Kaolin formulations have also been shown to suppress diseases in greenhouse and field studies (Haggag 2002, Puterka et al. 2000, Glenn et al. 1999), and to kill insects in stored grain (Mostafa and Al Moajel 1991). Labeled products for these purposes are not currently available in the US.

The use of Surround® (a trade name for kaolin clay) can increase overall fruit yields in regions with high light and temperature levels (Puterka et al. 2000). In these situations, it can act as an anti-transpirant, reducing stress on the plant.